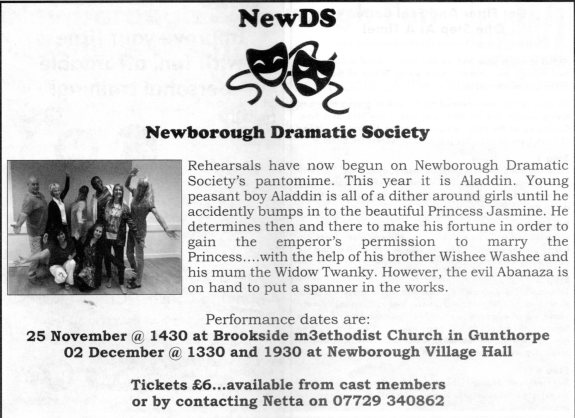 Newborough Amateur Dramatic Society or NewdS for short are a small group who endeavour to put on at least two shows per year.

Its origins go back to 1989 and the brainchild of Gary Snart, Richard Barben, Paul Cooper and others who had the idea of putting on a show in the village hall on a similar lines to the "Wheel Tappers and Shunters" show of the 1970's and 80,s. Several village organisations including the Church, WI, Fons (Friends of Newborough School) amoungst others all contibuted with an act. The first show went out on 22nd April 1989 and was compared by Richard (Superbutch) Barben in the old village hall.

The evening was a huge success with rave reviews from all who went to watch either of the three shows, held on consecutive nights.

On the back of this success several of those who took part wanted to continue and produce a Pantomime for the next year. Thus NewdS was formed.

Over the next few years many pantomimes were performed including such classics as "Jack and the beanstalk", "Cinderella" and "Humpty Dumpty" along with some unusual productions such as; Panto at the OK corral, Robin Hood and Treasure Island.

In 2004 the group decided to do something different and experimented with a comedy murder mystery; "A tomb with a view". Although a success and over the next few years similar productions followed the group has always had a passion for doing pantomimes.  It has also done a variety show following a wartime theme.

In its good times there would be four sell out shows per production with one on Thursday and Friday night  and two performances on a Saturday. Needless to say the after show party was an event from which legends are born. These parties are still talked about to this very day.

In recent years there has been a shortage of males prepare to go on stage and many a plea has gone out for more members. There is still plenty of opportunity for budding thespians to fulfil their desires and join the group. You will all be most welcome.

To Contact for more information or to hire the hall please e-mail newboroughvillagehall@outlook.com
or phone Margaret Cave on;